The old Italian nursery rhyme sings “what a beautiful castle – mine is more beautiful – we will burn it –  we will rebuilt it“. What a nice exemplification of the eternal struggle of power over space. The city is the solidification of power relations. Few places are more exemplar of such a substance of urban space than this rectangle of soil in the northern part of the small island on the Spree at the very centre of Berlin. Since its birth, this city has been a result of the composition of two divided parts, the trading town of Berlin on the east bank and the fishing village of Cölln on the southern part of the island. When, in 1442, the Holy Roman Emperor granted the territory of Brandenburg to the Burgrave Friederich von Hoenzollern, the new Elector of Brandenburg coerced the formerly free city of Cölln to give up  part of the island for the establishment of a feudal residence. Since its establishment the Schloss represented unification through subjugation.

In 1701 Friedrich I becomes the King of Prussia, and Berlin its capital city. The residence was upgraded to a Royal Palace according to the Baroque design of Andreas Schlüter. In the mid Nineteenth century with the addition of a neoclassical dome peaking over 70 meters the building was dominating Berlin from its very center. With the defeat in WWI and the collapse of the monarchy, the Schloss was marginalised by the democratic Weimar Republic, which symbolically neutralised it through transformation into a Museum. Similarly did the nazi, coherent with their plan to erase Berlin to erect Germania atop its ashes. This task was then partially fulfilled by allied bombing raids, which left the castle heavily damaged. After the war the building ended up into the Soviet sector and the GDR government claimed its irreparable  damages to raze it to the ground. The huge empty void that resulted was renamed Marx-Engels-platz. The statues of the two philosopher were left to guard the coming of the phantom of the proletariat, who meanwhile used the place to park their Trabants.

To fill the void in 1973 was erected the Palast-der-Republik, by some depicted as a communist version of the Centre Pompidou in Paris. The modernist multifunctional structure was intended as a mix of parliamentary seat and cultural facility.  As a matter of fact the Palace hosted little administrative functions, as they could not find real use for democratic processes in German Democratic Republic, and it functioned in fact as a huge “house of people” providing party-directed entertainment and propaganda activities. Ironically, it was only in the 1990s that the first elected parliament of East Germany settled in the Palast der Republik and one of its main political responsibility was the dissolution of the DDR in the hands of the “free” west. That could have been accounted as a symbolic value of the monument, which instead was immediately charged as the epitome of the evil communist power and destined to demolition. It must be said that hundred of tons of poisonous asbestos employed to built it facilitated to silence the critical voices claiming for its preservation.

Since the 1990s the integrated spectacle dominates the city in a choreography of cranes, excavators, water pumps and building sites. Ruin porn, dancing in abandoned industrial sanctuaries, in-between occupations and affected lousy sexiness set up the new market rules of the city, putting on sale the fashion of its frenetic transformation, attracting creative pioneers and cool hunters, and behind them, smart international real estate investors. The dawn of the third millennium puts on the show of the demolition of the evil palace as part of the new global entertainment program of Berlin, one of its best performances  as a spectacular device dedicated to spatial transformation. The process of deconstruction was a lenghty one, as the building was symbolically dismantled piece by piece, in stark contrast with previous violent bombings.  The symbolic power of the unmaking of the Palace of the Surrendered Ideology has pervaded the urban landscape for years. Ironically, from the debris of the Communist palace, 30.000 tons of steel have been sold to build up the the Burj Khalifa skyscraper in Dubai, the tallest man-made structure on the earth, ultimate symbol of the triumph of extractive capitalism. 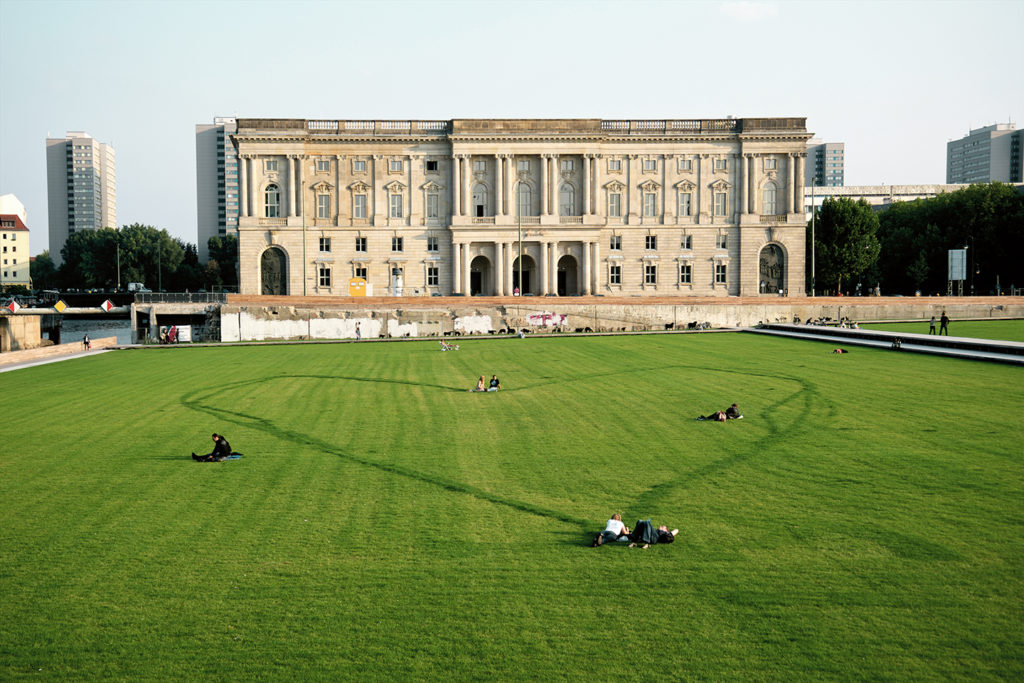 Power in these times is more disguised, elusive, disintegrated. Waning feudal lords and kings, dictators and totalitarian parties, to hegemonically direct the spatial transformation of the city is now the pervasive self ruling liberal market, cautious to not  diverge too much from consolidated national imaginaries. Under capitalism the establishment of new symbolic stances and spatial configurations follows more labyrinthine processes, made of  lobbying and PR strategies where image production and spatial process reveal all their primordial imbrication. In this scenario, a new hypothesis emerges, a cartel takes the lead on the redevelopment of the newly leveled heart of Berlin. The project is orchestrated by Wilhelm von Boddiens, entrepreneur who created the “Association Berliner Schloss” to promote the reconstruction of the Prussian castle trough a media campaign and an thorough political lobbying. What is proposed is nothing other than the exterior reconstruction of the Prussian Baroque façade applied to a modern structure with the alleged function of a cultural facility. A kitschy restorative operation comparable to the reconstruction in Moscow of the Saviour Christ Church made  by Yeltsin on the site planned for the never realised Lenin’s monument. The project is ostensibly unsupported by the majority of the population of Berlin, which sees no reason to restore an imperial symbol at the very heart of city, let alone the quarrel over the the demolition of the Palast experienced as an humiliation by many Easterners. 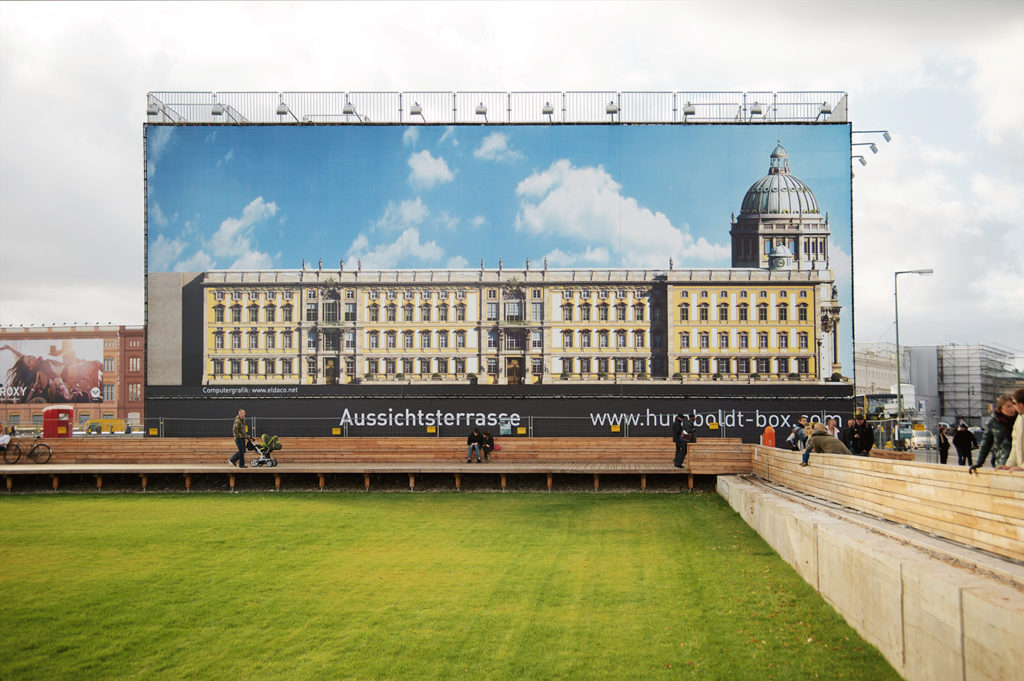 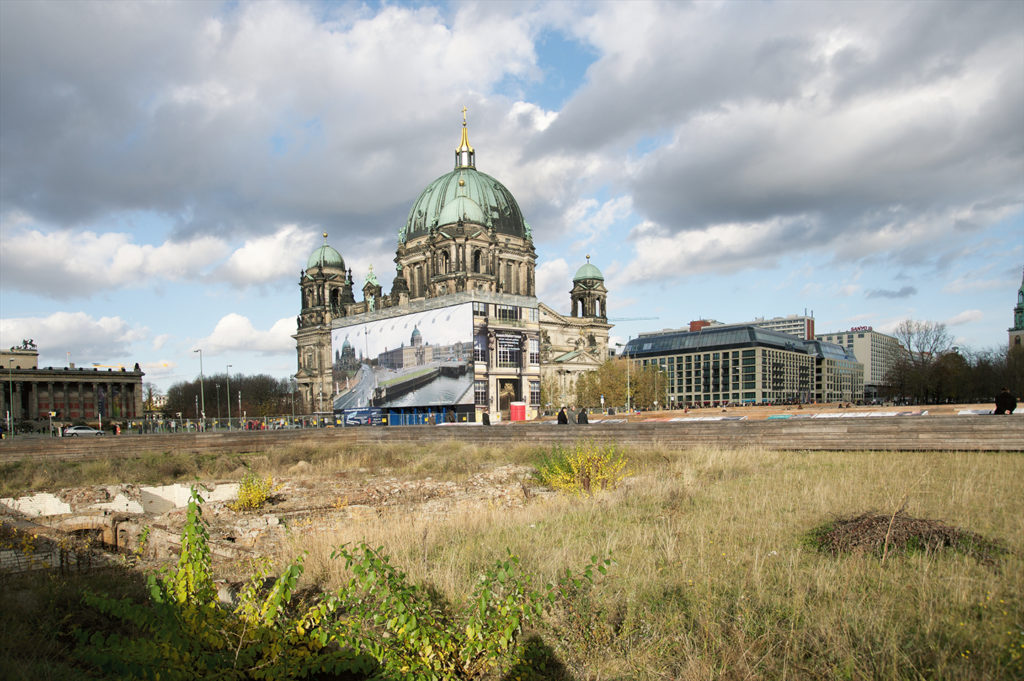 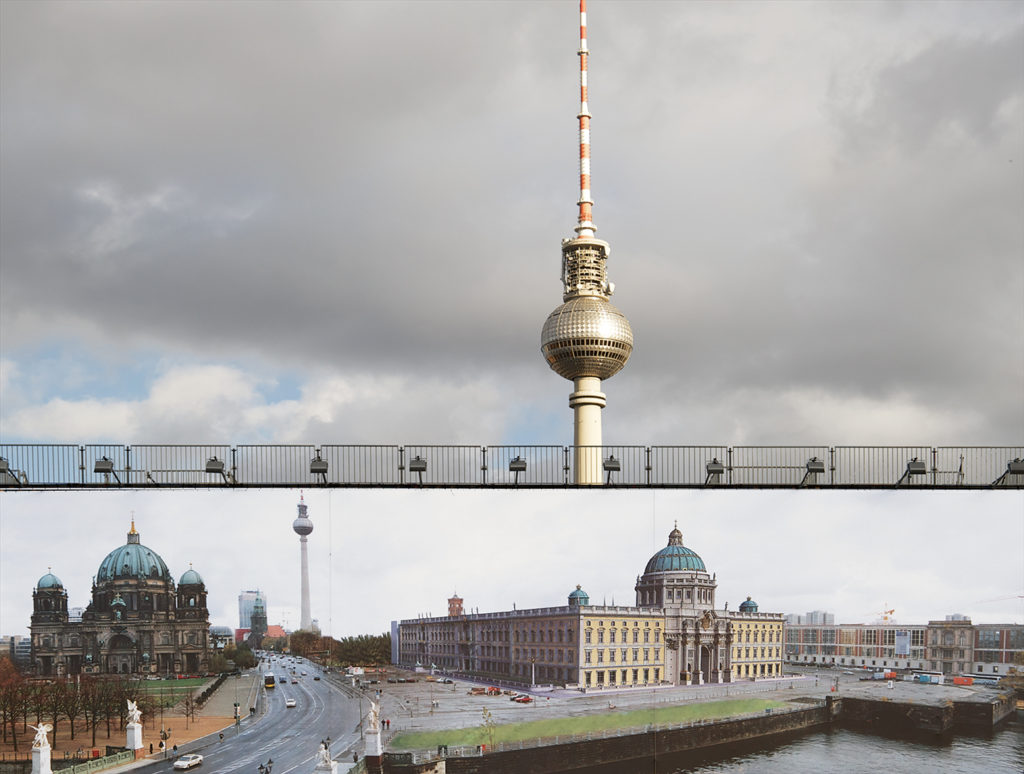 Nevertheless, given the support at Federal level and the grip on the touristic marketers of the city, the private initiative  succeeds  to get the political approval at the Bundestag.  A public-private partnership is set to fund the project, providing concept and design for what is ambitiously labeled “Humboldt Forum”. A temporary structure is set on the area, used to popularise the project and for the fund-rising of its realisation. Inside you find also a sample of the exhibition foreseen in the future venue. The disputable appearance of the external wrapping will be completed with the equally disputable installation of an ethnographic collection. As a whole, critics read the operation as an expression of Euro-centric colonialism.

This project is the the cherry on top of the controversial development policy that since the 1990s pursues the reinvention of  the center of Berlin as the epitome of the reunification process. The ideological determination to erase the historical multiplicity of elements and narratives in favour of a hegemonic perspective dictated by the globalised metropolitan mainstream has until now produced a range of disappointing developments and financial failures, as showed by the relative mediocrity of the Potsdamer Platz development or the awful performance of the close Leipziger Platz including the recent bankruptcy of the Mall of Berlin. Similarly, the slow and uncertain  redevelopment of Alexanderplatz, is marked by the systematic vilification of any remnant of the socialist city as the excuse for the settlement of a series of lousy and banal shopping arcades and franchise hotels.

Finally, despite all its biased aspects, including part of the required fundings not being secured, and the cold reception of Berliners, in front of the disconsolate gaze of Marx and Engels construction works started in 2013.